We at DVA send Metta to all the Sri Lankan people. May you all be healthy and safe.

The island nation of Sri Lanka has the longest, uninterrupted history of Buddhism of any county in the world.  Today more than 15 million Buddhists live in Sri Lanka out of a total population of 21 million. For the past five years, Dharma Voices for Animals (DVA) has been engaged in a project throughout the country to encourage compassionate diets.

The sad truth is that Sri Lanka, among countries that celebrate democracy in the world, ranks dead last in protecting innocent animals. The current animal welfare law, called the Preventing of Cruelty to Animals Ordinance, passed in 1907, is barely two pages long, and is no longer relevant in a modern society. After 115 years, it is time that a country, where DVA has been very warmly received, to join the other democracies in the world and finally pass a modern animal welfare law.

DVA has been working for five years behind the scenes to encourage passage of a modern law which has been languishing since 2006. Over the past two years we have been dramatically increasing our support for the Animal Welfare Law, which hopefully will soon be voted on by the Sri Lankan Parliament. We are all very grateful to the visionary and compassionate political leaders in Sri Lanka who have publicly supported this proposed law.

We will continue to provide updates on the progress of the proposed legislation. 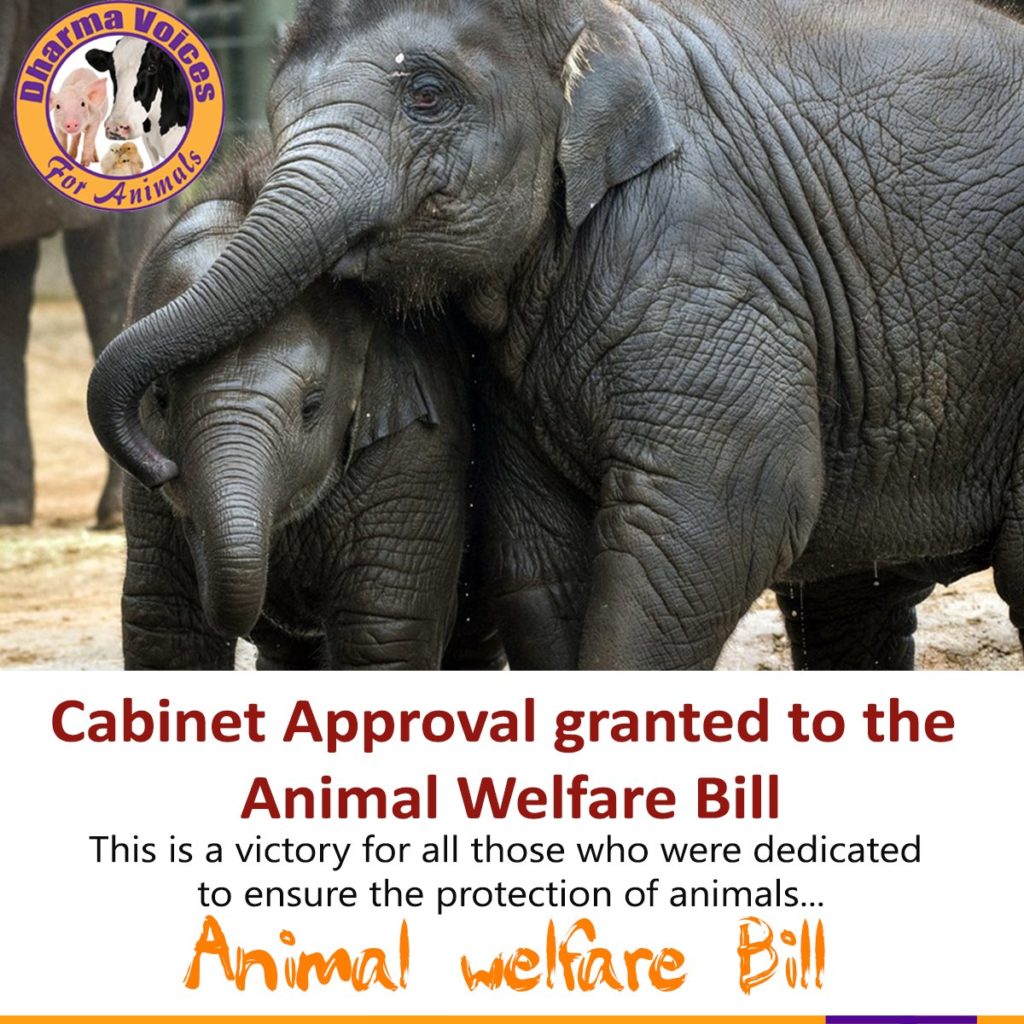 Sri Lanka, October 26, 2017: About 700 people filled the large auditorium in the Buddhist Cultural Center in Colombo, Sri Lanka, for DVA’s second annual Asian Buddhist Animal Rights Conference. The Conference officially launched our Sri Lanka Project, which is going strong five years later. Speakers, panel discussions, and outstanding plant-based food highlighted our event. The photo on the left shows DVA President/CEO Bob Isaacson giving the keynote address, while the photo on the right shows the Honorable Karu Jayasuriya, the then Speaker of the Sri Lanka Parliament, telling the 700 people in attendance and a national audience via television and newspaper coverage that he doesn’t eat animals and fully supports DVA’s Sri Lanka Project. Bob’s keynote address was seen on our Facebook page.

For the past four years DVA has been making presentations at Dhamma (Sunday) schools where approximately 80% of Sri Lankan Buddhist children attend.

At the Dharma schools we talk directly to the children, their parents, and the teachers about the benefits of taking animal flesh and animal products out of their diet.

The live programs usually include a PowerPoint presentation and a showing of our short film: Dharma Voices for Animals Sri Lanka Project: Heart or Tongue? We also include the history of how Sri Lanka was largely a vegetarian island before the invasion and occupation by European powers and a call to Sri Lankans to return to their culture of non-harming and compassion. Our teams hand out six-page brochures in Sinhala, the native language of Sri Lanka, introducing DVA and explaining why Sri Lankans should adopt a plant-based diet:

Our team presentations have also focused on medical doctors, soldiers, and farmers. In February 2019, DVA’s Sri Lanka Project team presented at an army post. More than 1,200 soldiers attended with almost all expressing, after our presentation, their intention to switch to a compassionate diet.

On October 10, 2019, DVA held a large event at the Nelum Pokuna Mahinda Rajapaksa Theatre in central Colombo, Sri Lanka for soldiers in the Sri Lankan army. For over three hours 1300 soldiers listened to DVA presenters who talked about the value of a plant-based diet. The response by the audience was beyond even our high expectations. 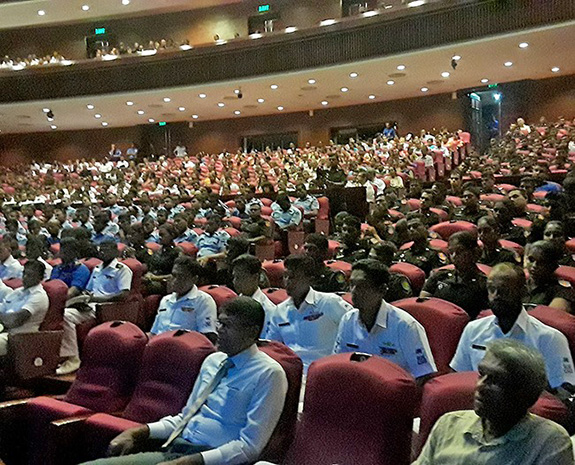 In 2019 and 2020 DVA made several presentations to the GMOA (Government Medical Officer’s Association), a prestigious organization of physicians, resulting in the GMOA publicly recommending a fully vegetarian diet for all Sri Lankans.

DVA’s Sri Lanka Project team also includes a group of veterinarians led by Dr. Chamith Nanayakkara, who are treating at no cost the animals that live at the temples and monasteries, making presentations to the Dhamma schools, and organizing vegetarian groups at each school.

DVA also has a very active Sri Lankan Facebook page Follow The Heart – GO VEGAN @DVASRILANKA, moving Sri Lankans to a plant-based diet as we reach well over one million people. You can like us on our Facebook page and get updates on nutrition, great food, and DVA activities throughout Sri Lanka.

DVA events, such as our May 5, 2018 vegan ice cream social on the streets of Columbo and our October 26, 2017 Animal Rights Conference have received front page coverage in the major newspapers and on national television. Articles and editorials supported DVA, and our message has appeared in national newspapers.

One of DVA’s four press conferences was held on Tuesday, October 8, 2019, with members of DVA’s Sri Lanka team.

We hold special events to bring attention to animal suffering caused by the Buddhist community.

Many dogs were starving on the streets of Sri Lanka as the Covid 19 crisis worsened on that island nation. DVA’s staff, aided by our volunteers, helped feed hundreds of dogs.

If you would like to volunteer to help DVA help animals and/or have questions or suggestions, please contact DVA’s Sri Lanka Project Director Shanika Gamage: shanika@dharmavoicesforanimals.org.