Bhante Sathi is a highly respected Sri Lankan monk who lives in Mankato, Minnesota, USA, where he is the Chapter Leader for DVA’s Minnesota, USA Chapter. Bhante teaches Buddhist retreats around the world in the Theravada tradition. He will serve as liaison to our ambitious project in Sri Lanka. 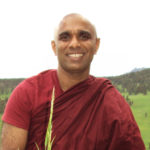 Emerging spiritual interests in his early teens led Bhante Sathi to be ordained as a novice monk (samanera) at age 19 in the Theravada tradition in his native country. After three years of education and training under Wattegama Dhammawasa Maha Thera at Sri Subhodaranaya International Bhikku Center, Sri Lanka, he received higher ordination as a fully ordained monk. As a monk, he taught meditation and insight practices and counseled people from many walks of life using Buddhist teachings.

Invitations from people interested in meditation led to Bhante expanding his teaching to Europe, Canada and the United States. In 1999 he became a resident monk at the Great Lakes Buddhist Vihara in Southfield Michigan and traveled around the US and Canada teaching meditation and mindfulness practices, the teachings and philosophy of Buddha (Dhamma), and leading retreats.

In 2003 he made Minnesota his home and, with the support of friends, founded Triple Gem of the North in Mankato where he began living. He became a US citizen and traveled the state, sharing his knowledge and training in the Buddha’s teachings, meditation, and mindful living. Bhante is DVA’s Minnesota Chapter Leader and the Co-Coordinator for our Sri Lanka Project.