To this day, I haven’t heard of any teaching of the Buddha which supports harming other beings for our own happiness or benefit. I think all the teachings of the Buddha support being a vegan because a vegan lifestyle is fully against harming other living beings. 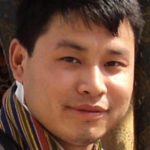 Please begin with telling us your name and where you live.
My name is Pema Rinzin. I was born and brought up in Bhutan. I currently live here in a remote place at the easternmost part of my country. Bhutan is in South Asia. I work here in the Sakteng Sub-District Administration in the Trashigang District.

I understand that you are Buddhist. Were your parents Buddhist? Other family members?
It’s kind of a culture and tradition that most Bhutanese follow. It has been passed down many generations. Likewise, my parents were Buddhist, so my family members are.

Are most people in Bhutan Buddhist?
As I mentioned above, we Bhutanese practice what our ancestors have been following for generations. So, most of the Bhutanese are Buddhist, but in the southern region they are Hindu, and there are Christian practitioners as well. In percentage, I think almost 95% of Bhutanese are Buddhist by birth.

What was it like growing up in Bhutan?
Basically, it’s been very interesting and very peaceful growing up in Bhutan as it’s a Buddhist country which seeks peace forever. But at times, after departing from my parents at such a young age, it was really challenging. And later, although since it’s a Buddhist country eating vegetarian is easy, when talking about vegan, as it’s something new for the people of my country, it’s quite difficult to get what we desire to eat. This is because our Bhutanese favorite vegetarian dish is Ema-Dhatshi (Chili-Cheese, if translated directly). So, wherever it may be, it’s quite common to have it in the curry that we consume because cheese is what we use for any kind of vegetarian dish. I still face the same kind of problem. But very soon I hope the Bhutanese will get to know about it and there may be some changes in the near future.

When did you become vegan?
It hasn’t been so long since becoming a vegan. But still, I can’t say if I can call myself a pure vegan because whenever I am required to visit neighbors or family friends or travel on a long journey, I have to unavoidably eat cheese curry. We can’t demand our choice in such situations. I think it was since September, 2014, when I decided to go vegan. Before that, I didn’t even know what vegan actually was.

Why?
I first learned about the term vegan from my facebook friend, a Buddhist spiritual woman, Tara Tulku Drimed Drolkhar Rinpoche. Later, having understood the sole meaning and benefits of being vegan, I decided to try it. I thought it was fully relevant to my views – it’s the way to stop animal cruelty.

Have you been talking to others about practicing veganism as a Buddhist?
I have been talking about it to my family members, office colleagues and friends, but they feel it would be difficult to stop consuming cheese and butter. Some of them aren’t interested in it at all. But I am trying my best to convince them.

Is it difficult to find vegan food in Bhutan?
If we look for it particularly and take some time it isn’t too difficult, but at high altitude regions in the remotest areas where vegetables can hardly grow and motor-able road connectivity isn’t there, it is really very difficult.

Now that you are a member of Dharma Voices for Animals, will you try to recruit more members in Bhutan?
This is what I have been waiting for since so long back. If DVA’s mission isn’t solely to benefit and give renown to it’s organization but instead is to benefit the whole universe as a supportive organization, I vow to work wholeheartedly. I will try my best to recruit as many members as possible in Bhutan. But the big problem is that without an office to show them that this is a DVA branch and we are recruiting you for this, it will be difficult for the Bhutanese to believe it. And more importantly, if a charity organization is heard to be corrupt, then everything will melt down at once.

Pema, is there anything else you would like to share with DVA members and others who are reading this interview?
As a DVA member, I think I am already fortunate. I have a heart to work with you sincerely and wholeheartedly. I hope DVA will fulfill the mission and vision of vegans and the Buddhist Dharma.I am also thinking of starting a charity to save animals in my country, but as it fully depends on donors’ money, it’s really very hard. But I much prefer to work with DVA or as a branch of DVA as we have the same mission.And along with this, I would like to share that I am also a member of Vegan Publishers. Though I can hardly do anything for them, they have been very cooperative and supportive of me. I acknowledge them for their continuous support despite my small participation.It is not only because I am a Buddhist that I want to save animals’ life but also because of my care about the suffering of animals and love towards them. I have not only a heart to support animals who are suffering but also to help underprivileged people all around the world. But as everything takes money, it’s quite disheartening for a person like me. I hope people getting to know about it may support my mission in their own ways. Finally, let me not forget to thank DVA for giving me such a privilege to share my own views with your organization and the whole world who is reading this. Thank you so much! Tashi Delek! Buddha Bless Us All…

1,000 strong and still growing. Thank you for foll

Posted @withregram • @earthlinged A family, not