In the morning of our event, a group of well-respected Dharma teachers joined Bob Isaacson and another DVA cofounder, Patti Breitman, to lead the event. Joining Bob and Patti were Spirit Rock teachers Bob Stahl, Richard Shankman, and James Baraz, and Jain activist and Dharma teacher, Jina Shah. 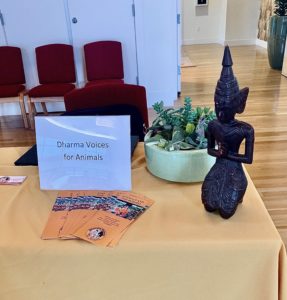 DVA’s Communications Director, Charles Rubin, was in attendance and tended to DVA’s table displaying a dana basket, books, DVDs of our film, and other gift items.

In the morning, the Dharma teachers, including myself, talked about the suffering of animals and how the Dharma encourages a compassionate diet, The retreatants broke into small groups to discuss some of the issues. Bob then introduced DVA and our widely acclaimed film, Animals and the Buddha, followed by a screening of the film.

After lunch, each of the panel members talked about our film, compassionate diets, and what the Buddha said about all this. In addition to Bob, Patti, and the rest of the teaching team, video presentations by Tara Brach, Will Tuttle, Konda Mason, and Dawn Mauricio were shown. Also, former Buddhist nun and vegan social activist, Thanissara’s eloquent statement was read to the audience by Bob Stahl while she was recovering from the flu. Then the panel answered questions and listened to comments from the audience. 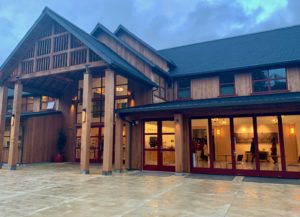 DVA heard lots of great feedback from those who were in attendance, offering their gratitude that animal suffering was finally the focus of an official event at Spirit Rock, the largest Buddhist center in the western world with 50,000 practitioners visiting each year. It felt really good that DVA was holding space in the beautiful lower meditation hall for the animals whose suffering has been largely unacknowledged. 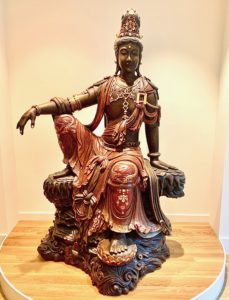 An audio recording of the first-half of the daylong is available on the Dharma Seed website. 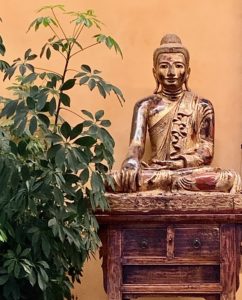 A lot of networking was going on with many animal activists. DVA also found new leadership to restart the San Francisco Bay Area chapter.

DVA also picked up some much-needed funds that will be matched by the same donor who will match your gift. We also signed up some new DVA members. The teachers donated to DVA every single dollar they received as dana (donation) which will also be matched!

There is a groundswell of support for making this an annual event! Stay tuned.