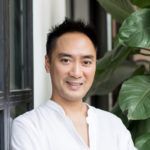 Olivier first discovered Buddhism by reading Thich Nhat Hanh’s books in 2010. After several years of practice in the Plum Village tradition, he enrolled in the mindfulness meditation teacher program lead by teachers Tara Brach (DVA’s Advisory Council) and Jack Kornfield in order to share the practice of Buddhism, mindfulness, and compassion with the world. He became a vegan and animal rights activist through the practice of Buddhism and the insight of Interbeing as taught by Thich Nhat Hanh. Olivier holds a Masters degree in Computer Science from San Diego State Unversity and has been a Software Engineer since 2006. He has worked for Sony Playstation Network and Intuit as a lead engineer. He has also taught mindfulness meditation to hundreds of employees and promoted veganism in the workplace.

Posted @withregram • @mindfulness.exercises It i

If your in the San Francisco Bay Area come join @d

@vetsforfuture Every animal has a right to live Jo

Don't miss your opportunity to watch the criticall

Mike on the Street. Watch on demand, the criticall

Register for Free and Watch on demand A Prayer for